Don’t Hesitate, Jump to the Cloud 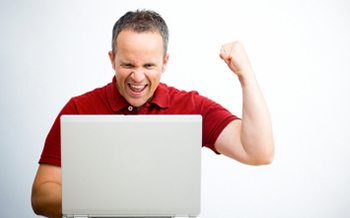 There has been a lot of hype about cloud computing transforming the way small-to-medium sized businesses do business. Proponents of the cloud say that cloud computing has leveled the playing field, allowing SMBs to finally compete with bigger companies despite their limited financial resources and staffing. We say it’s time to jump to the cloud.

Still, many are apprehensive to make the jump. They’re hesitant to give up control and they fear the cloud will expose them to greater security risks. Moving to the cloud definitely requires a leap of faith, but a recent ComScore study, completed on behalf of Microsoft, suggests that those who are froggy enough to take the leap (sorry) have no regrets once they do.

In fact, more than half of those surveyed wish they had adopted it earlier and feel that the benefits far outweigh their initial worries.

What are those benefits?

According to the study, 94 percent of companies who’ve adopted cloud services believe they’re now more secure than they were before, thanks to the cloud’s spam management and up-to-date systems and antivirus protection.

61% of those surveyed reported fewer instances of downtime since their move to the cloud. Even those who still experienced downtime events felt that they were shorter in duration and that full recovery could be achieved much quicker.

93% indicated that they were more confident in their ability to fully recover after an outage. Comparatively, 73% responded that they felt the integrity of their data in the cloud was stronger than previously, which is interesting since data integrity has often been the biggest worry about the cloud.

Any company striving to be more “green” will appreciate the environmental benefits of moving to the cloud. A recent six-month study conducted by the Berkeley Lab found that moving 86 million U.S. office workers to the cloud resulted in the use of 87% less energy, leaving enough leftover electricity annually to power a city the size of Los Angeles for twelve months.

Cost effectiveness and greater ROI (return on investment) are the most important factors in getting CEOs and major decision makers to support shifting to the cloud. A Rackspace commissioned study conducted by Vanson Bourne, found that 62% of respondents felt that adopting cloud computing strategies freed up money that could be reinvested in other operations like marketing, customer service, product development, and expansion into new markets.

Conclusion – Jump to the Cloud

Contact Responza today to set up a
FREE Information Technology Audit.
Find out if you’re getting what you’re paying for.

This website uses cookies to improve your experience. We'll assume you're ok with this, but you can opt-out if you wish. Read More